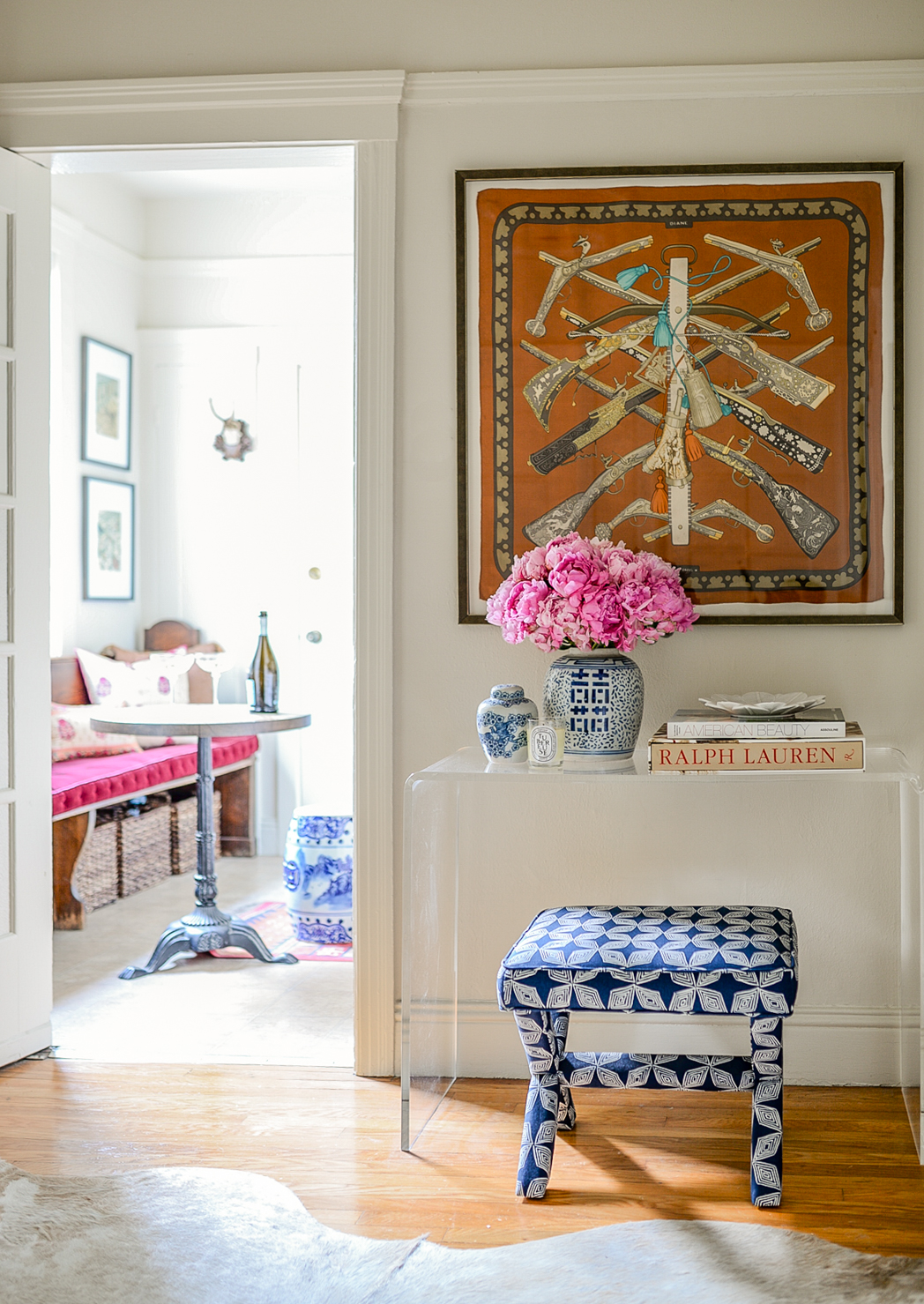 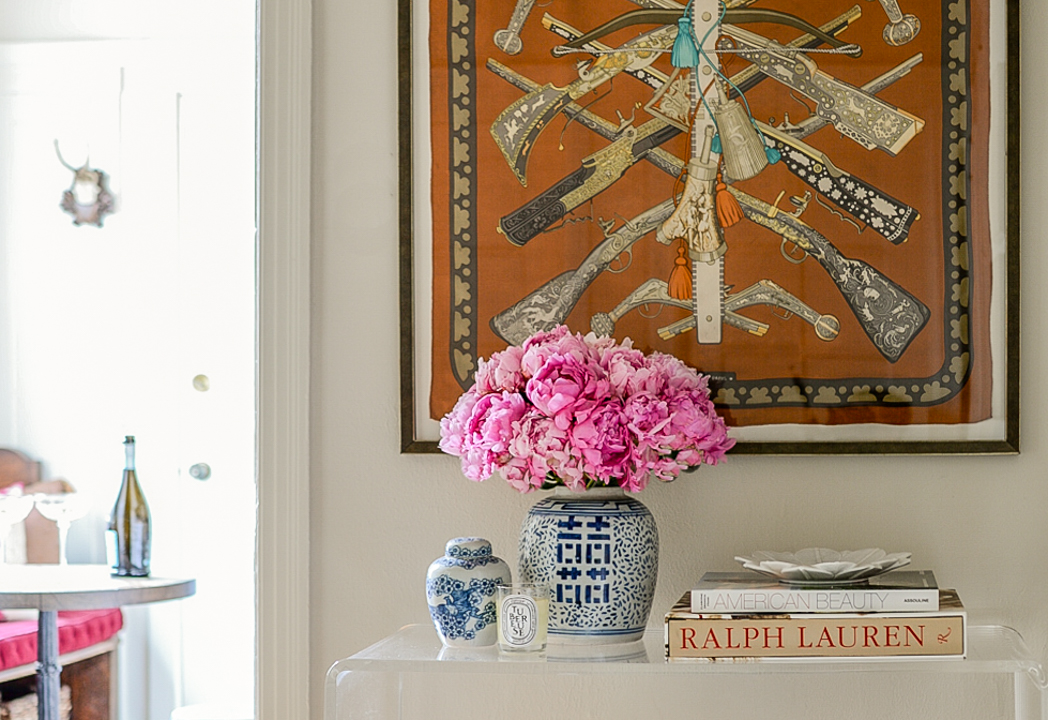 I recently discovered that a photo of our little entry hall from last year was my most re-pinned image on Pinterest. The pin’s popularity reminded me that you can make a big impact even in a small space, and if I were to guess I’d say it’s so popular because of the dramatic framed Hermès scarf on the wall – which is one of my absolute favorite pieces in our home.

Our entry hall is relatively large (7′ x 11′) but mostly dead space because it connects every room in the house and the walls are covered in doors – seven to be exact. The design left us with very little room for furniture and we opted to place a small console table by the front door to offer a landing strip for keys, mail, and my purse. This acrylic table was perfect both because it was visually light and didn’t protrude far from the wall. Tucking a bench underneath is helpful for putting shoes on or taking them off.

Since the entry is also the hub of the apartment and gets a lot of traffic going to and from the other rooms I wanted a stain-resistant rug that I could turn frequently so it wouldn’t have “paths” worn into the fibers. Don’t be fooled by the white cowhide! Cowhides are some of the most stain-resistant rugs out there. Think about an actual cow – and how they roll around in the dirt and mud and yet can easily be washed clean. It’s the same for our rug which makes them great candidates for under dining tables and other accident-prone areas.

The pièce de résistance in this room is undoubtedly the Hermès scarf. I stole this idea from my friend Christine who decided to frame and hang a scarf her parents gave her since it didn’t get enough use as an accessory alone. Now, framing textiles is one of my favorite ways to add large-scale art to your home, and Hermès scarves are perfect since their intricate designs are works of art in their own right. Furthermore, they often more than double in value when framed.

Here are my top tips for framing scarves:

Let me know how you’ve approached designing your entry halls by shooting me an email or in the comments below! You can explore my other home tour posts here and here.

And be sure to SUBSCRIBE HERE for regular interior design, entertaining, and travel inspiration sent right to your inbox!

You may also enjoy: 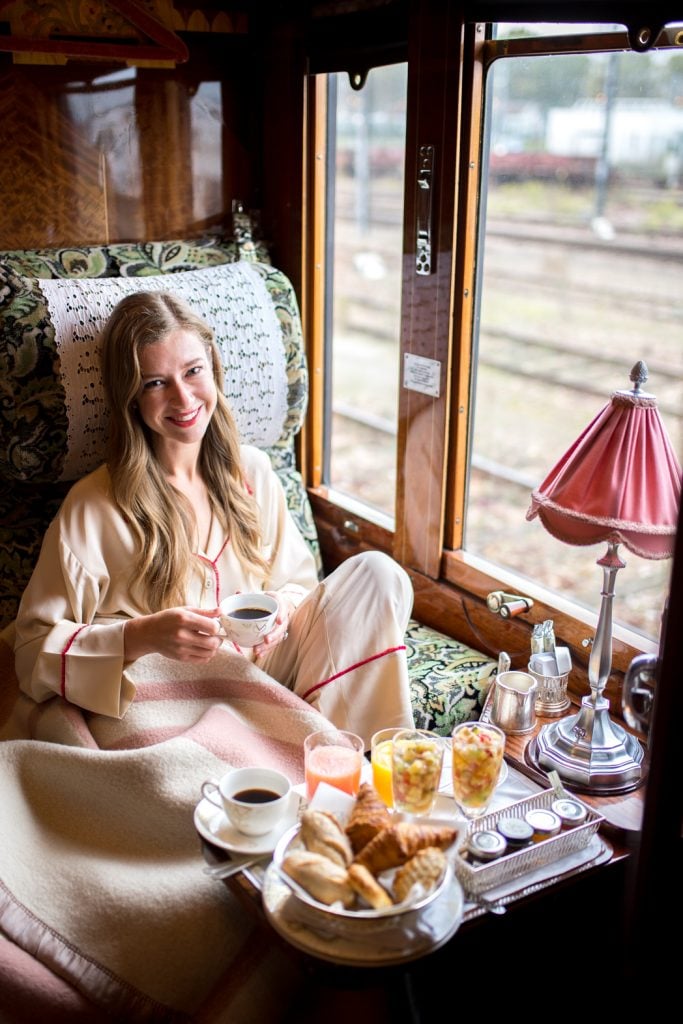