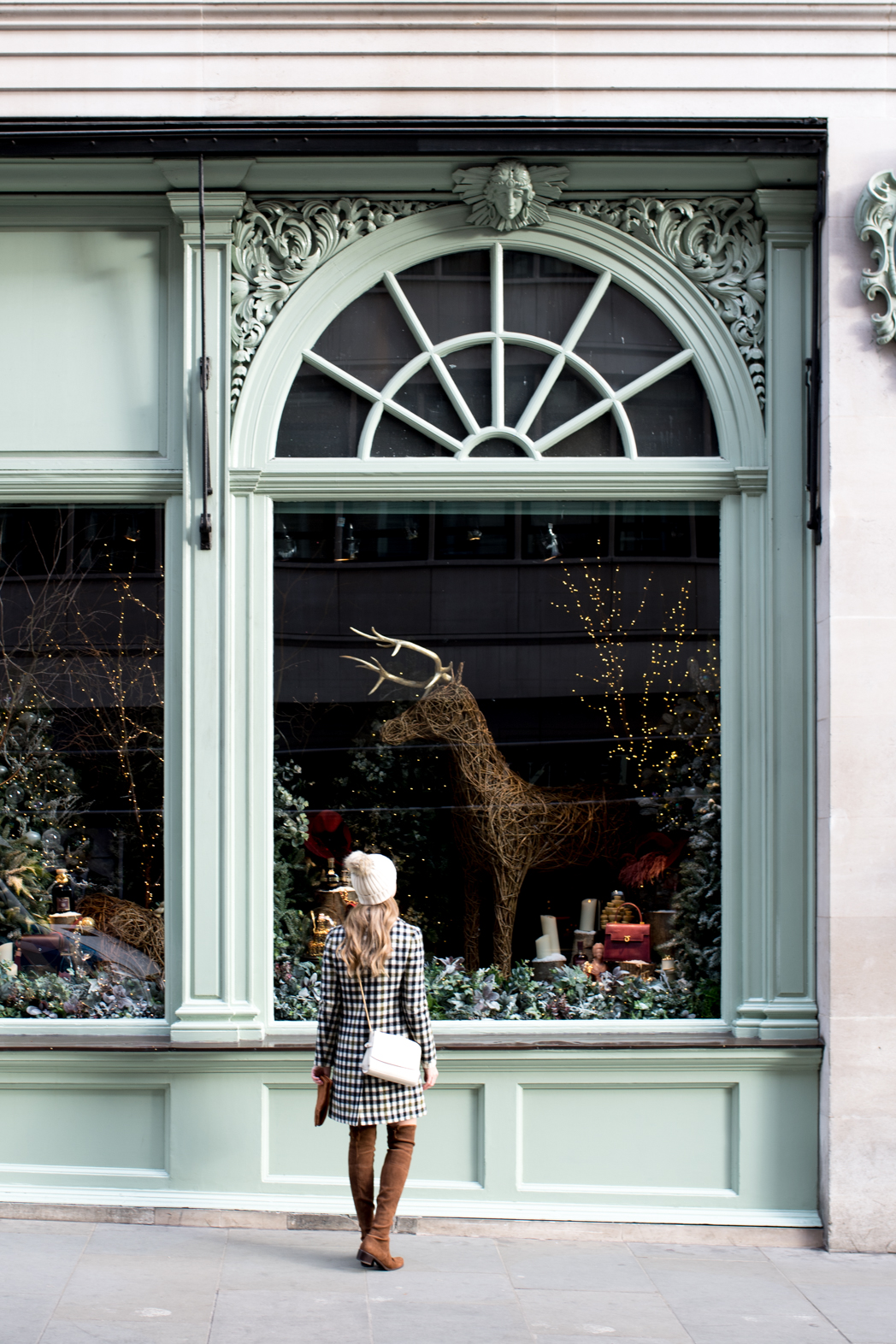 David and I started our #12CountriesofChristmas tour in London, England, and it’s hard to imagine a more perfect destination to kick things off. If you didn’t see our announcement last week, for the month of December David and I are doing a whirlwind tour of the “12 Countries of Christmas” starting in London, England, followed by Norway, Sweden, Finland, Estonia, Latvia, Lithuania, Poland, Czech Republic, Austria, Germany and Switzerland. Phewf! We’ll be exploring Christmas markets, winter landscapes and how the holiday is uniquely celebrated in each place. We’re sharing our day-to-day on my Instagram and IG stories so make sure you’re following along here, and continue reading for my top 7 Christmas activities from our time London! 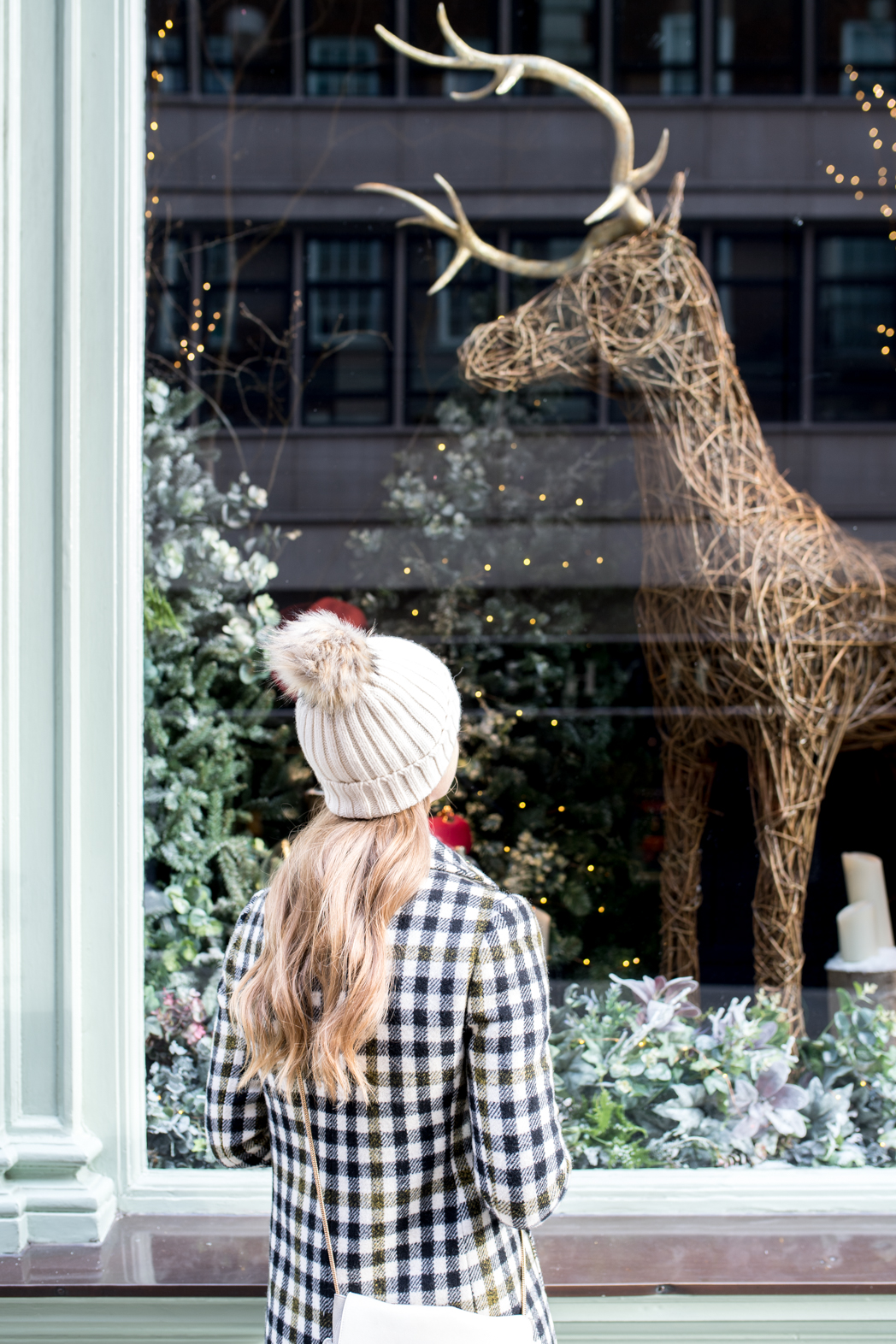 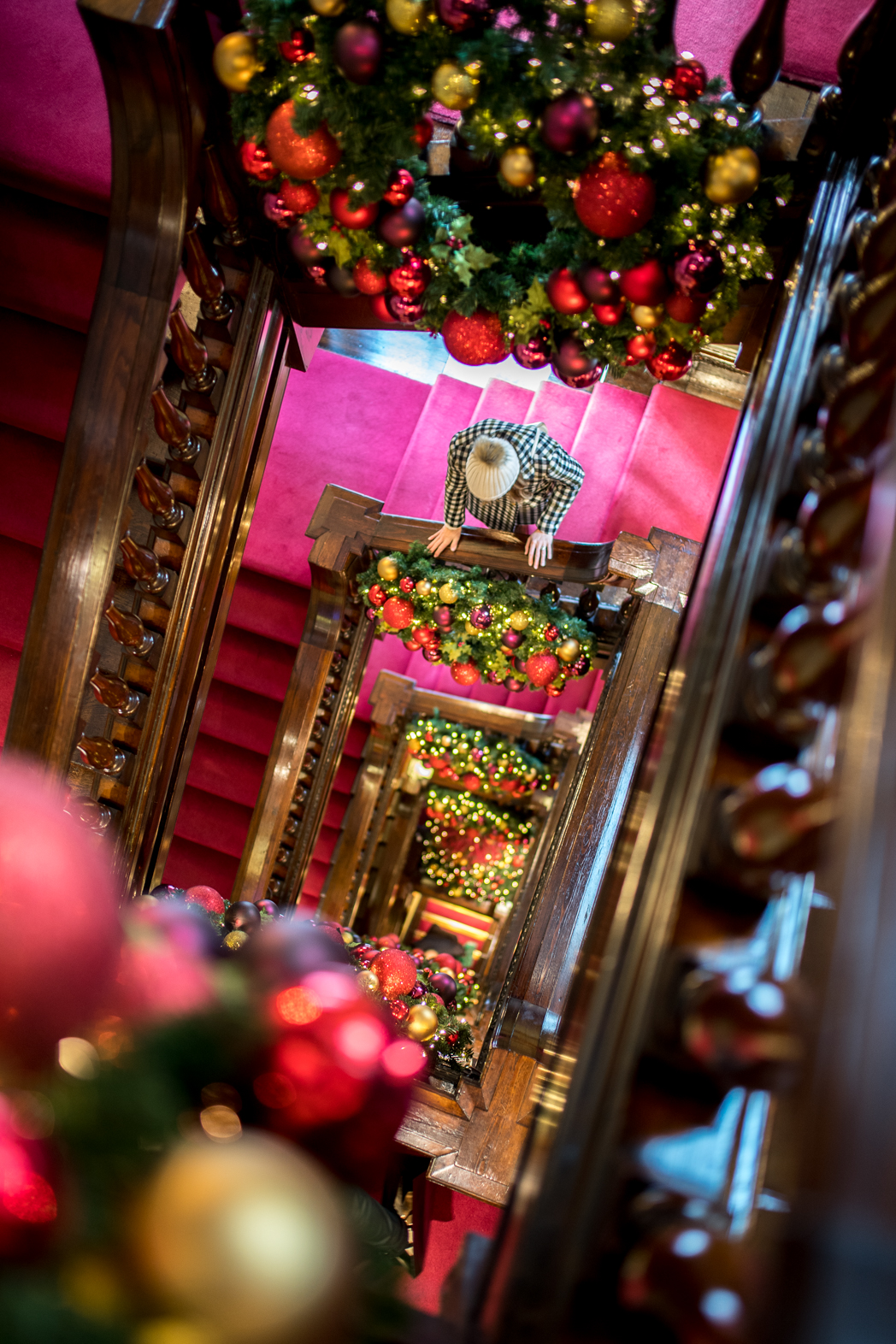 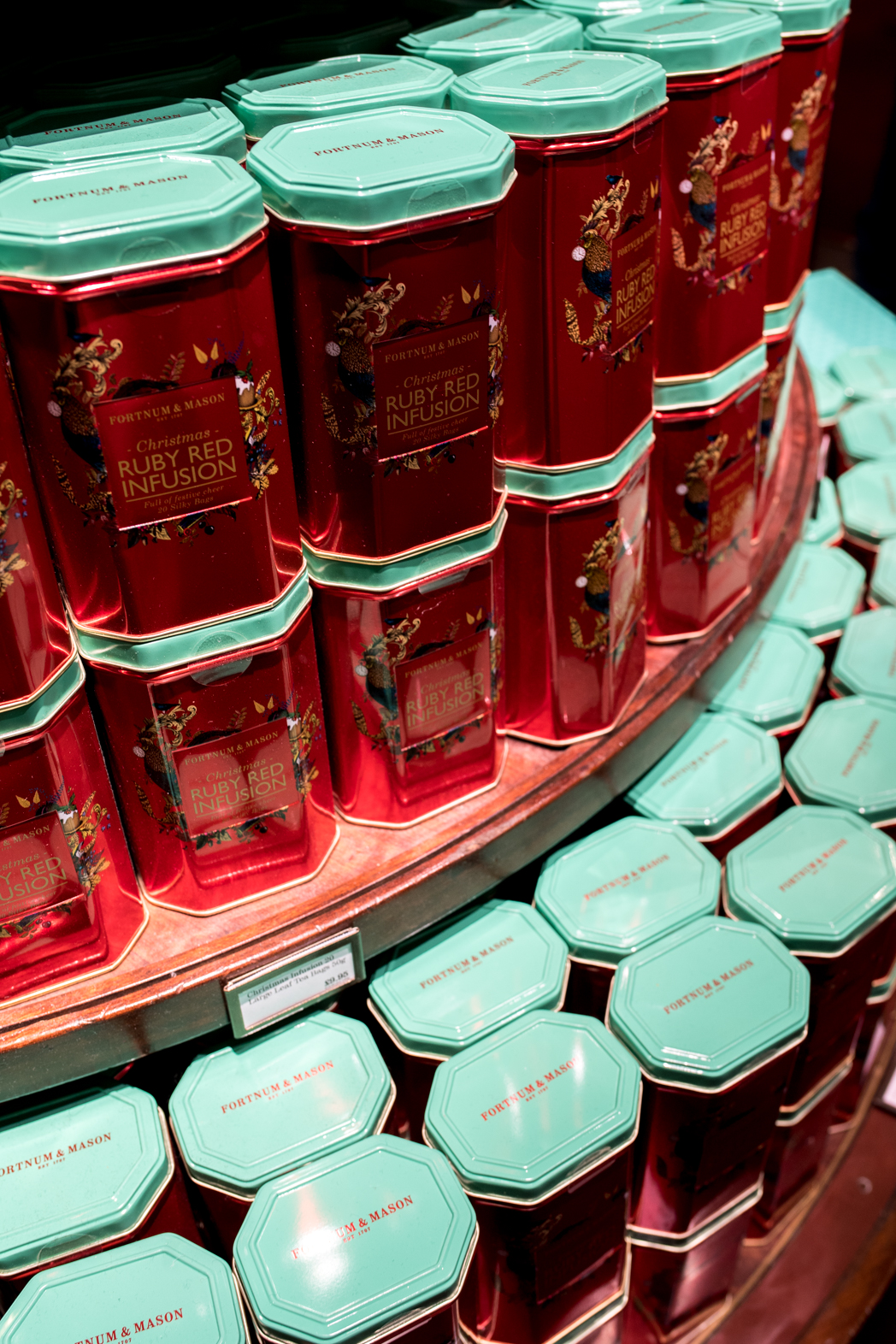 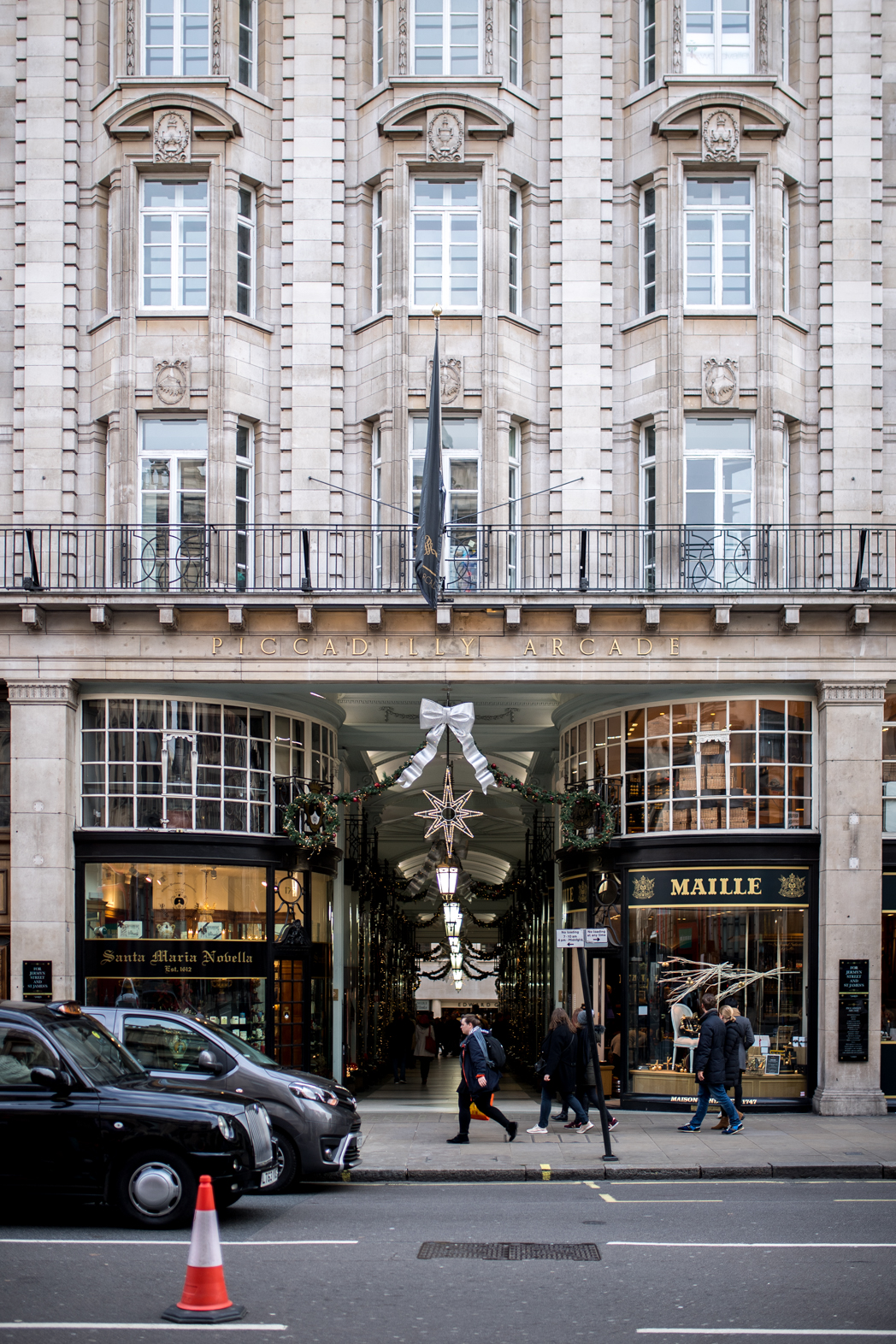 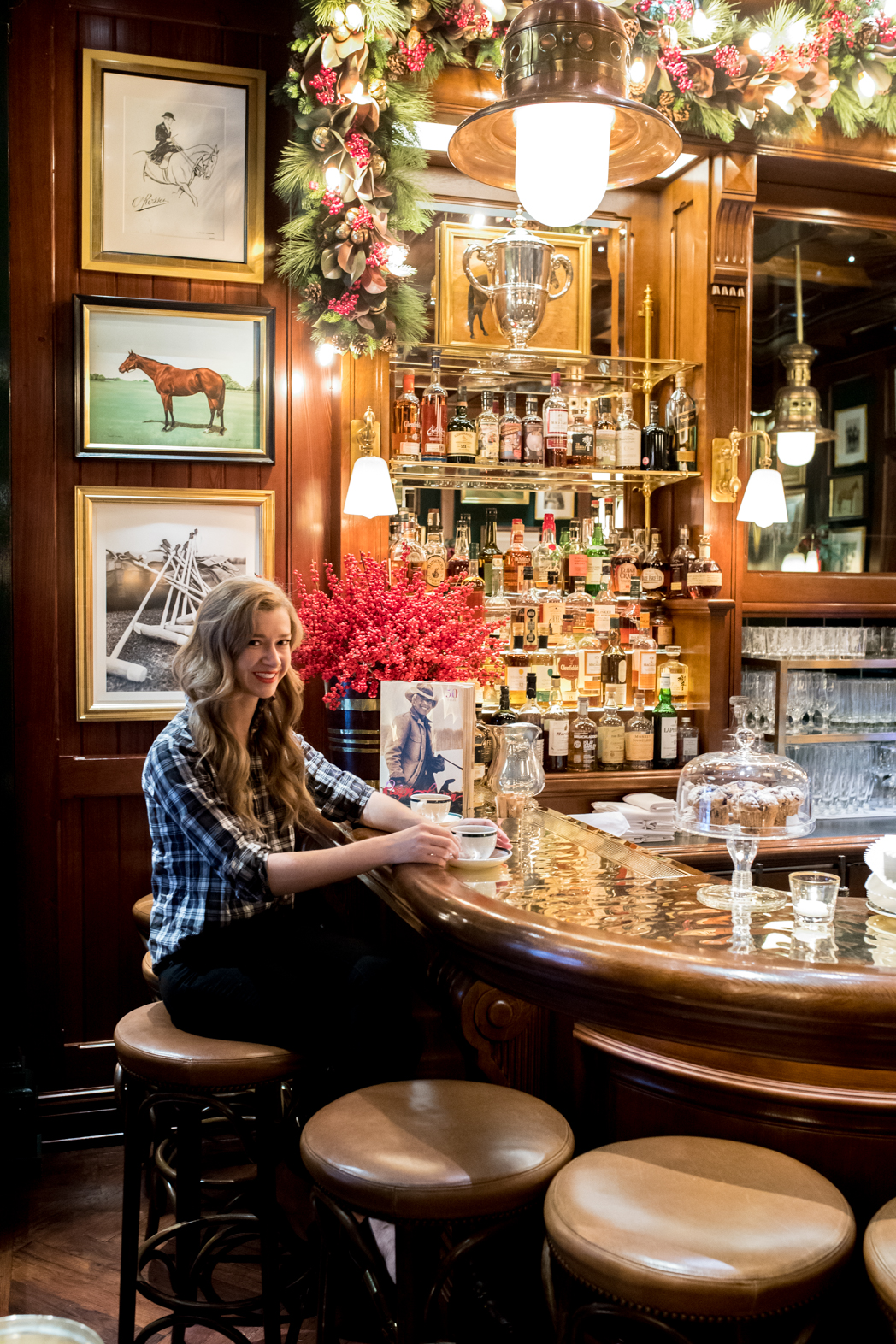 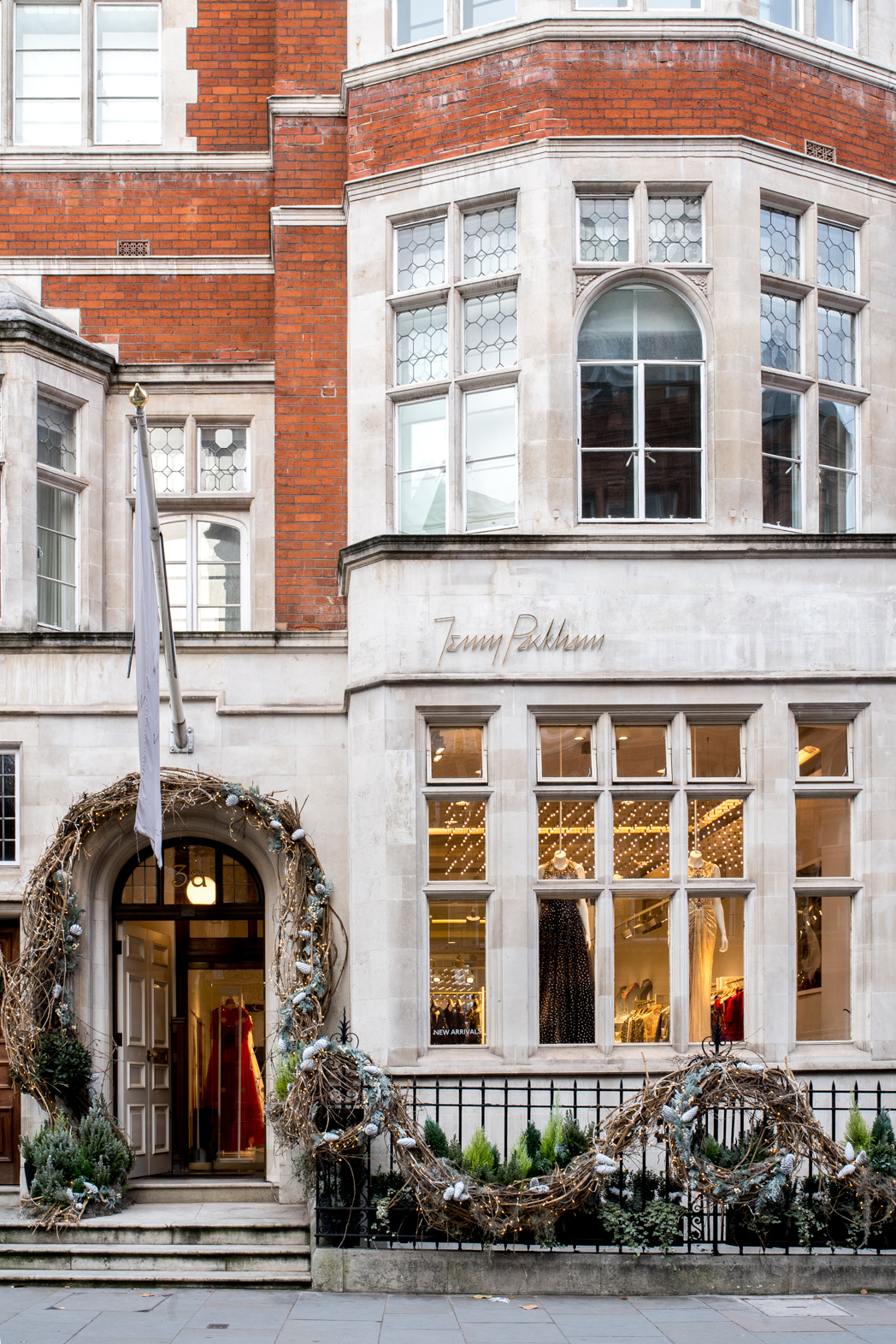 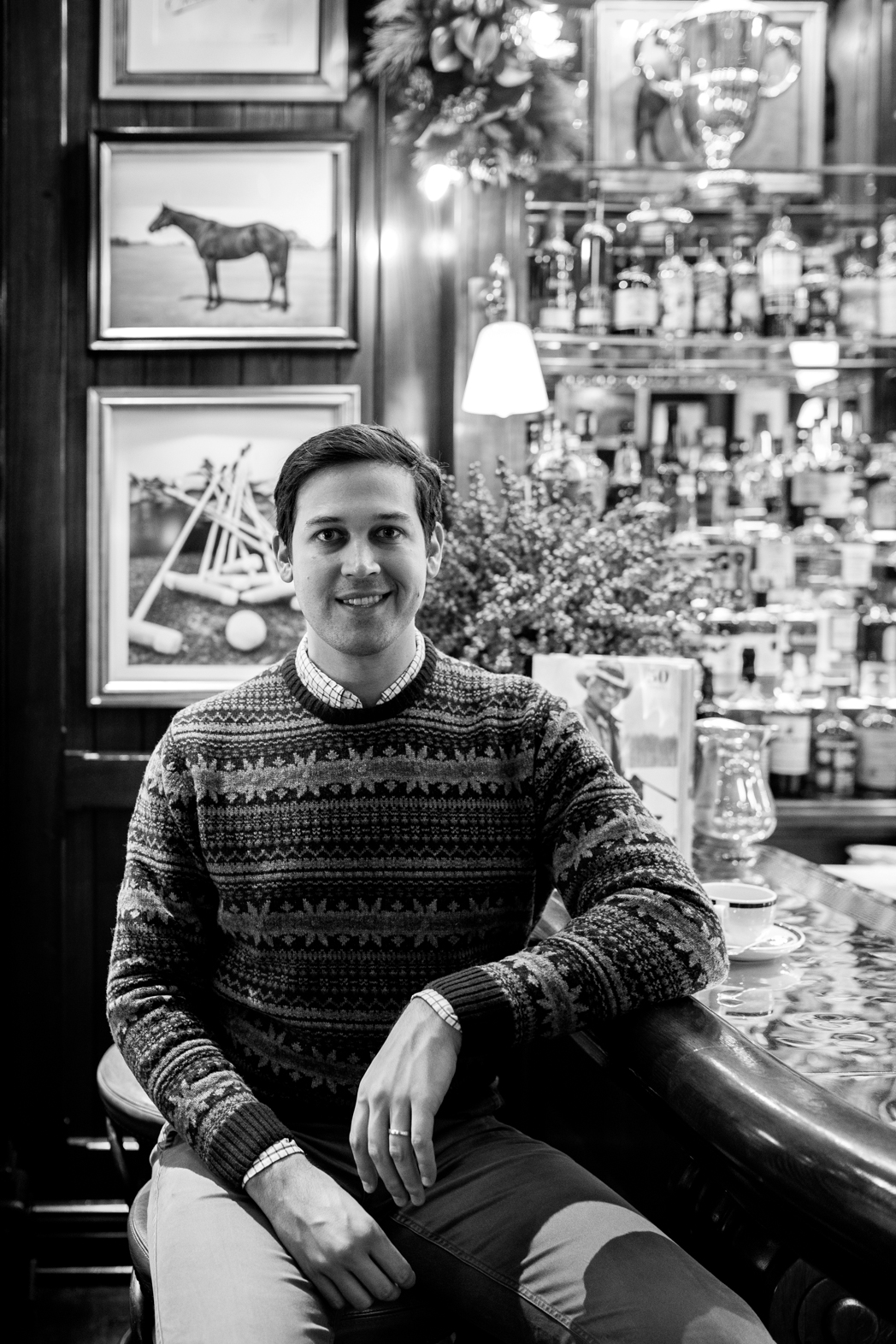 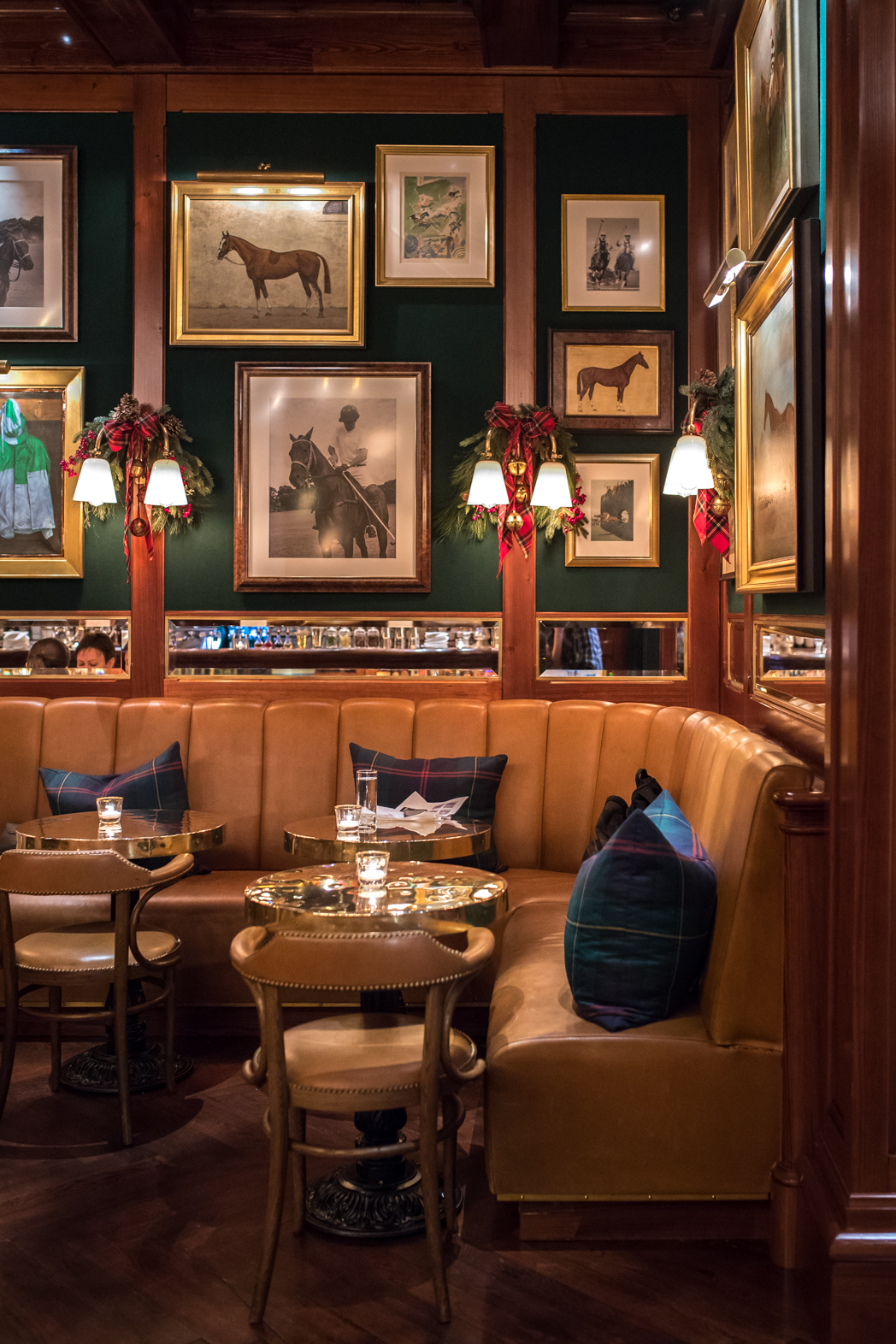 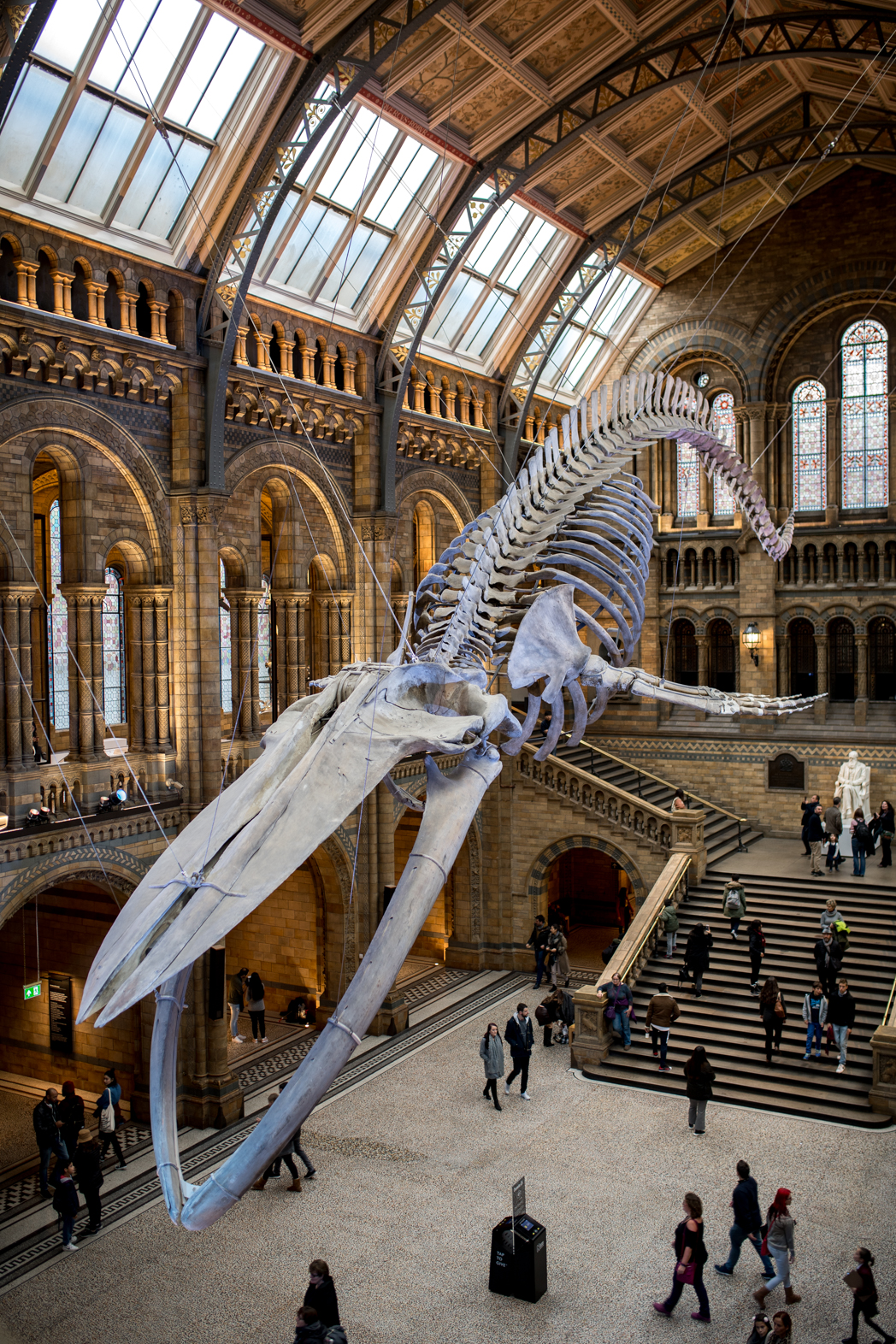 1. Fortnum & Masons for a Christmas Hamper – Every Londoner I’ve spoken to agrees – Fortnum’s is the best shopping destination for the holidays, and I love the British tradition of a Christmas hamper stuffed full of holiday treats like mince pies, terrines, festive jams, shortbread and cookies. From the opulently decorated windows and staircase to the band playing Christmas favorites outside it’s a very merry way to kick off a weekend in London.

2. Geffrye Museum – This museum occupies a row of Almshouses in Hoxton and chronicles the evolution of how middle-class Londoners have decorated and used their homes since 1600. Especially fun to visit during Christmas as they include period-appropriate Christmas decorations and traditions in each of the 16 rooms. I learned so much – from the Puritan Parliament outlawing Christmas celebrations in 1644 because they were too bawdy and raucous, to the introduction of live Christmas trees (a German tradition since the 16th century) to London homes in the 19th Century.

3. Carols at St. Paul’s Cathedral – Experience St. Paul’s as it was meant to be enjoyed at a service during Christmastime. We attended their Advent Processional on Sunday which was an etherial evening of song focused on the theme of light in the darkness.

4. Ice skating at Natural History Museum – I got to meet up with my friend Emma on our first day in town for a delicious G&T at The Commercial Tavern in Spitalfields and she was full of fabulous recommendations for our time in London. My favorite from her list was skating at the Natural History Museum – gliding around a massive Christmas tree with the stunning NHM facade as a backdrop. We arrived an hour early and took a quick tour of the dinosaur and bird exhibits inside which are spectacular (and free!) before popping down to pick up our rental skates. The skates were a bit uncomfortable at first but once we were on the ice I quickly forgot about their pinch and was the last one on the ice at the end of the session!

5. Festive Afternoon Tea – There are so many wonderful places to enjoy afternoon tea in the city it’s hard to choose just one! The Ned opened earlier this year and after seeing photos of Mille’s Lounge we decided to stop by. Formerly a grand banking hall, Mille’s sprawling lounge had live music on a weekday afternoon, glittering Christmas tree and a fun, wintery take on afternoon tea with gingerbread men, coconut snowmen meringues and mince pies. (Ralph’s Coffee & Bar at the Ralph Lauren Flagship store and The Ivy Chelsea were two other equally festive spots for coffee and brunch respectively. – Thank you Robyn for introducing me to The Ivy!)

6. Holiday windows at Harrods – New York has Bergdorf Goodman and London has Harrods. The year’s windows are sponsored by Dolce and Gabanna and are an over the top take on la dolce vita at Christmastime.

7. Christmas Market – There are numerous markets around London in December and we really enjoyed the South Bank Christmas Market. Primarily composed of food stalls and a chic pop-up chalet it’s a great gathering place for the 20-30 something crowd.

You may also enjoy: